Home / Facts that Matter / Questions of Equity in Social Capital

Questions of Equity in Social Capital

Left unattended, social capital or the lack thereof has the ability to reproduce existing inequities. It also points to the importance of addressing the systemic problems that have created these inequities. However, if social capital investments are managed correctly, they can promote equity and address historic and systemic barriers to accessing social capital. 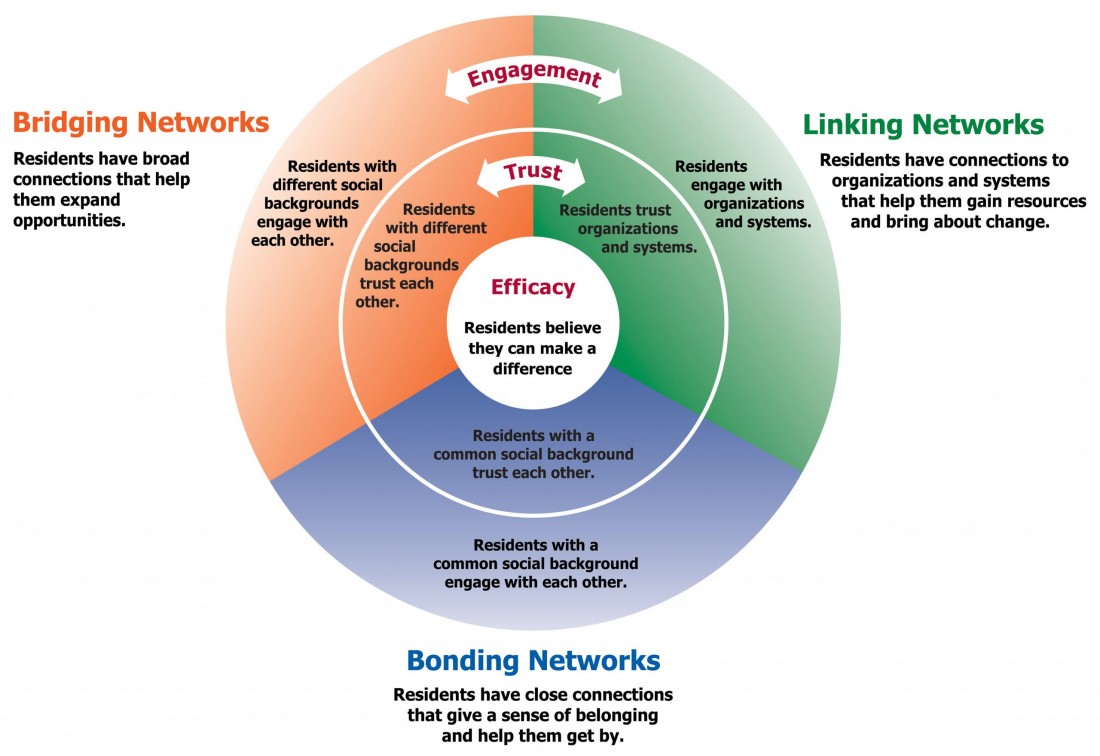 Social capital is essential to socioeconomic mobility because our social networks provide access to resources, support, and information that are a crucial element to opportunity. Conversely, the lack of access to social capital may perpetuate generational inequities. Historic and current discriminatory public policies shape access to social capital by influencing where we grow up, who we go to school with, and how connected we are to community institutions.

Charlotte, North Carolina recently placed 50th out of 50 major cities for upward economic mobility in a report from Harvard University. Despite Charlotte’s economic surge in prosperity, the report noted that the benefits disproportionately go to those who are already advantaged. Indeed, a more recent qualitative study of Charlotte residents revealed that access to jobs, education, and housing opportunities in Charlotte is framed by race, gender, and income, with racial dimensions playing the most significant role in the dynamics of social networks. Additionally, there are significant differences in the strength of social networks in Charlotte. White community members experience the greatest benefits from their social networks relative to jobs, education, and housing. Specifically, white men benefit the most from social capital and access the broadest, strongest connections. These social connections give them access to financial and networking assistance, references for jobs, education, and housing opportunities.

In contrast, Black community members have fewer strong connections across job, education, and housing opportunities. This limits the ability of Black community members to acquire and exchange social capital resources. There is also a significant difference in the social network strength of Black men and Black women. Black men have the weakest networks among Charlotte residents, typically relying on just one person for support when exploring employment, educational, or housing opportunities. In effect, Black men have less access to economic mobility than whites and Black women.

Source: How We Rise – How Social Networks in Charlotte Impact Economic Mobility | The Brookings Institution

Most social connections are formed in educational settings or in the workplace. Exclusion from these institutions can inhibit individuals from building valuable connections. Black boys are much more likely to be removed from educational settings than white boys. In 2012, Black boys accounted for 20,090 suspensions compared to 2,643 for white boys. In effect, Black boys are removed from school at a time when they should be forming social networks. Additionally, Black men are removed from social and professional life. In Charlotte, Black men are almost 10 times more likely to be incarcerated than white men. Black unemployment rates are twice that of white unemployment rates. In an environment where most people make social connections at school or the workplace, high incarceration rates of Black men and high rates of Black unemployment also have the effect of removing Black men from settings crucial to social network formation. Covid-19 has only exacerbated the rate of removal from social networks.

Left unattended, social capital or the lack thereof has the ability to reproduce existing inequities. It also points to the importance of addressing the systemic problems that have created these inequities. However, if social capital investments are managed correctly, they can promote equity and address historic and systemic barriers to accessing social capital.